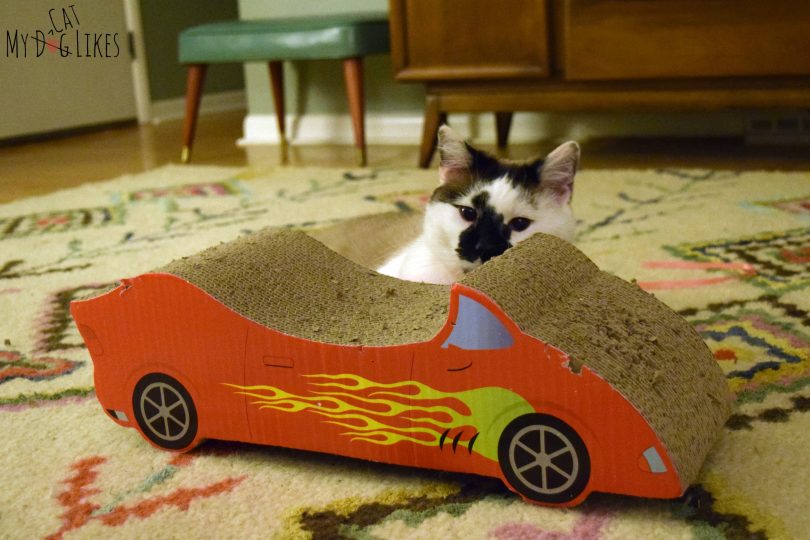 We have a bit of a tradition around the MyCatLikes household…

Each year, Lucas gets a brand new scratch pad on Christmas morning. This just so happens to correlate pretty well with when he has worn out the old one and our chairs and area rugs start looking more and more appealing!

In order to mix things up, we like to try out a new style every year – and you might be surprised to see just how many different types of cat scratchers are on the market!

While browsing the selection at PetSaver Superstore (our local go-to pet store), I came across the Cat Love Race Car Scratch Pad. As soon as I laid my eyes on it, I knew that it was just what I was looking for! 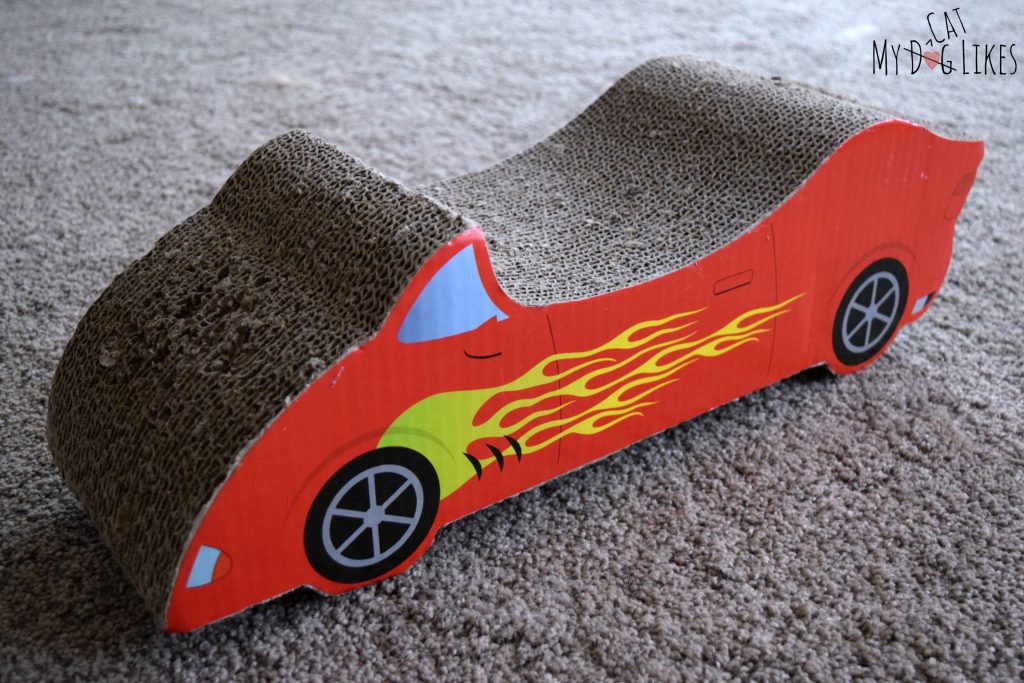 That’s right, you are looking at a race car shaped cat scratcher! This brightly colored scratcher is formed from layers of corrugated cardboard which are accessible on all sides (even the bottom!). 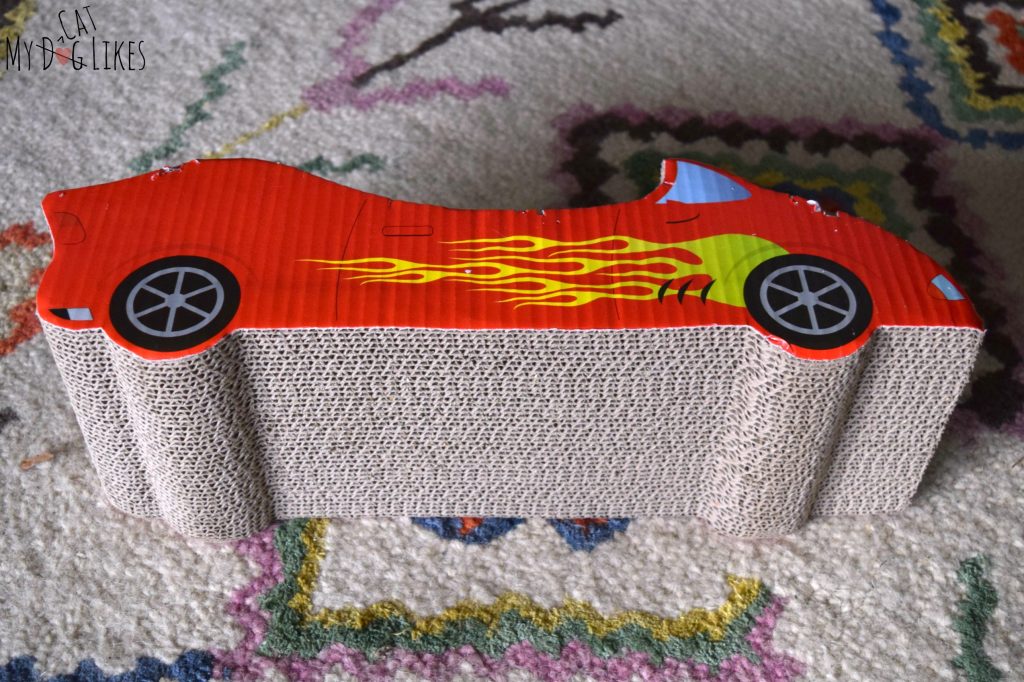 Cat Love is a division of Hagen – one of the largest pet product manufacturers in the world. Their portfolio includes more than 2 dozen well known brands in the dog, cat, fish and bird spaces. A few years back, we reviewed their Zeus Bomber dog toy over on MyDogLikes.

Along with the Race Car, they offer several other fun scratcher styles including the Den, Caterpillar, and Wave.

Testing it Out! Our Cat Love Car Scratcher Review

One of the first things I noticed is that the Cat Love Car scratcher is relatively lightweight – enough so that a cat could move or tip it fairly easily. This differs from many other scratchers we have had in the past which either have a wider or heavier base. 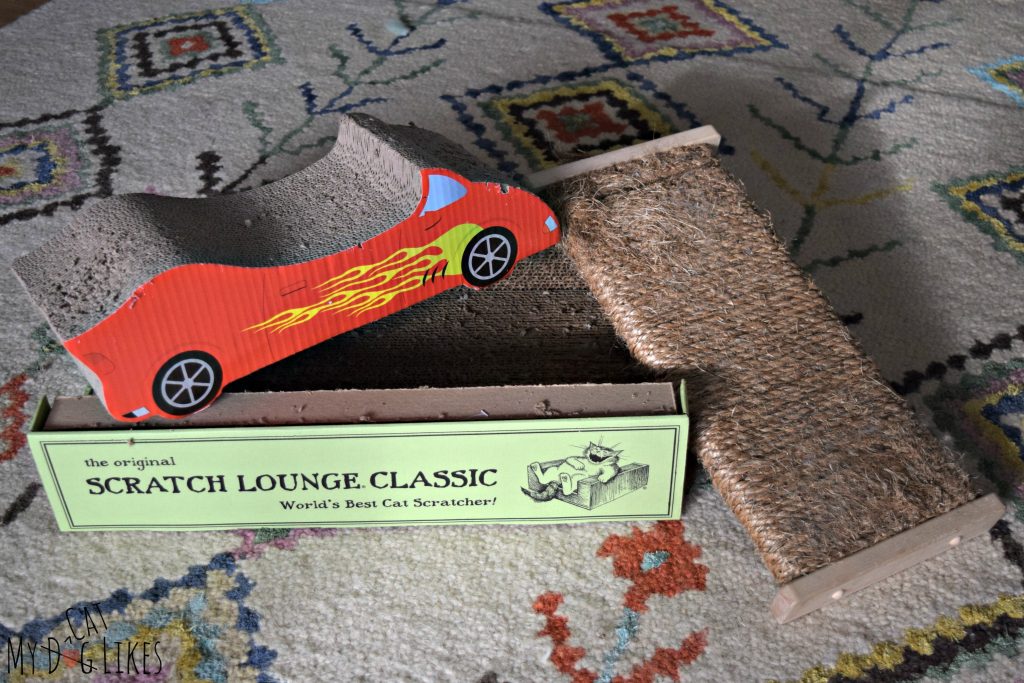 What I thought was going to be a con, actually made for some interesting types of play which you will see later…

Whenever we get a new scratcher, we typically rub a bit of catnip onto it to grab Lucas’ attention. For convenience, Cat Love actually includes a small pouch of catnip with every scratcher!

What you see below is the immediate result… 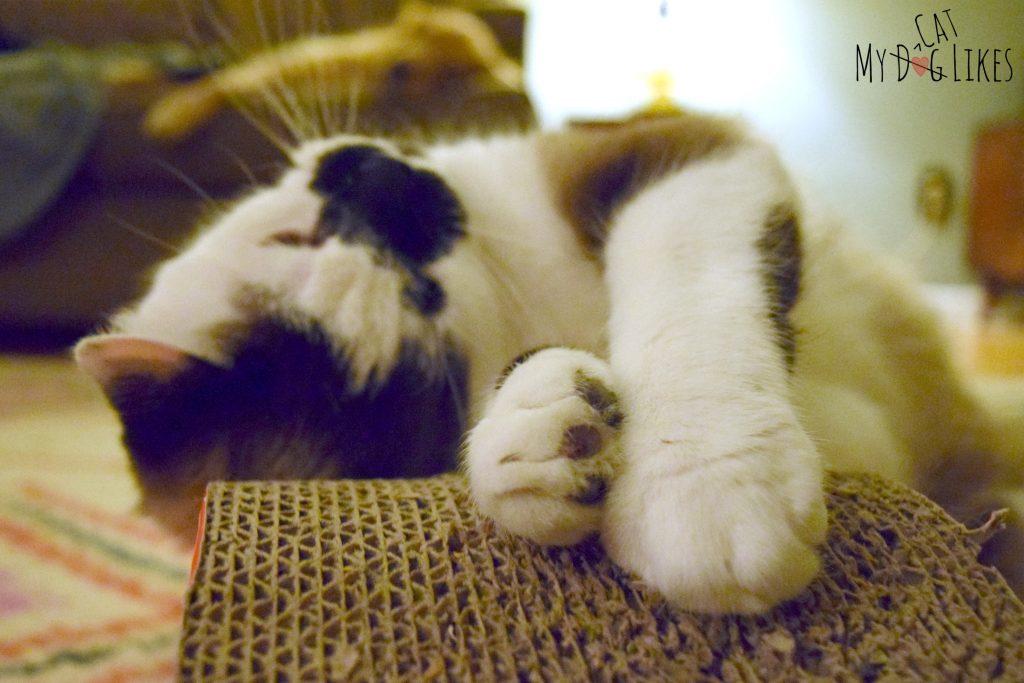 As soon as he got a whiff of that catnip Lucas was all over his new scratcher – clawing and rolling around. After several minutes of active play, he decide that it made for just as good of a resting space. 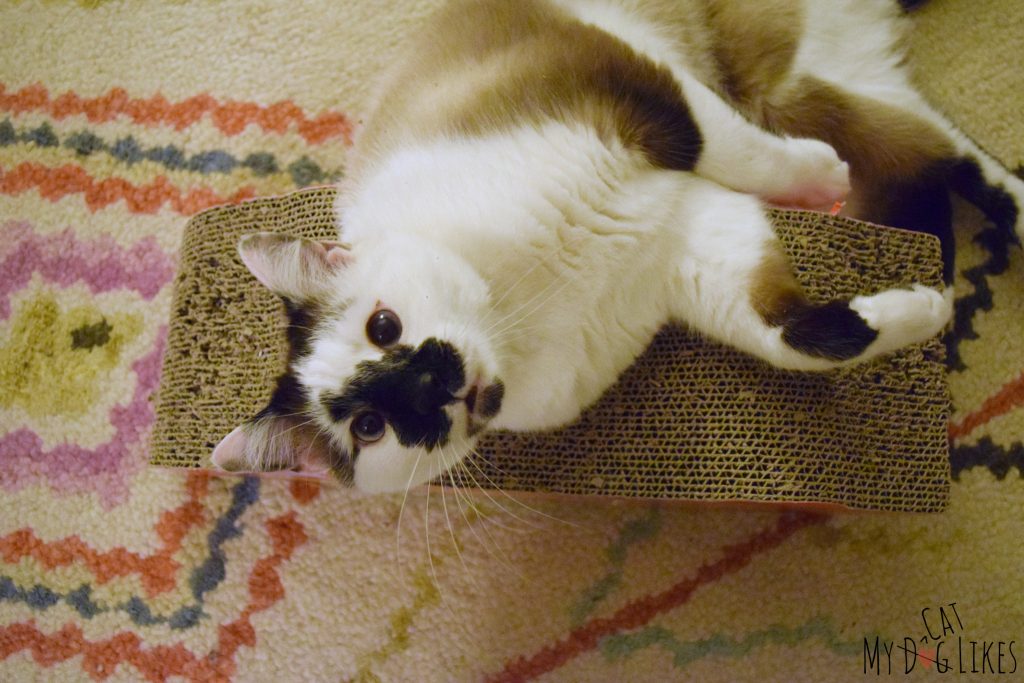 Lucas spent the entire first day alternating between vigorous play and laying on or near his new scratcher. He did at times tip over his car (which we would refer to as a crash), but since there is cardboard on the underside as well, this did not hamper playtime in the slightest. It actually led to lots of lying on the side, back-leg kicking which is always fun to see! 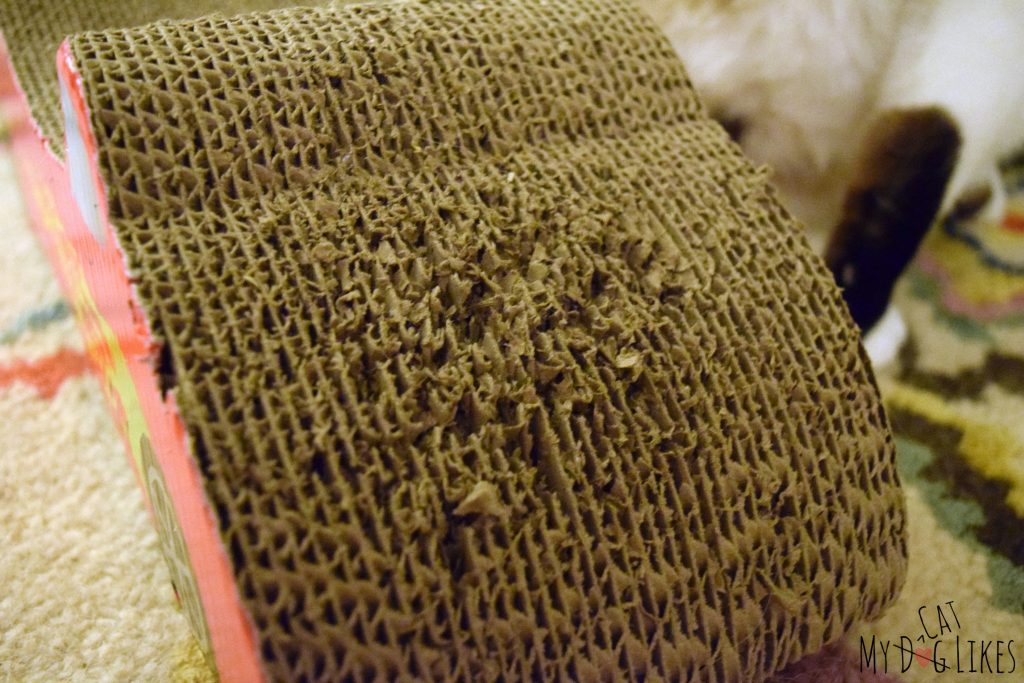 Here is a close up view of the corrugated cardboard after a few weeks of heavy play. As you can see, it is quite durable but does tear just enough to be satisfying. This type of scratching is very important for cats to keep their claws honed and healthy. It also helps them to relieve some pent-up energy! 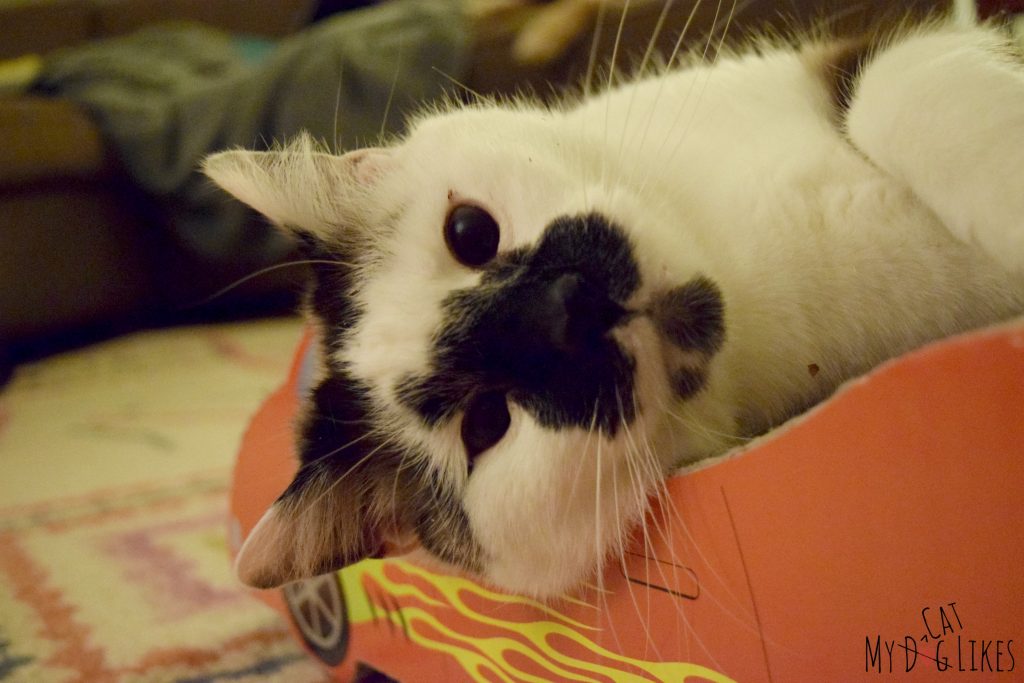 This is a look of EXTREME contentment!

First things first, it is adorable.

While I may have picked it out as much for myself as for Lucas, he is absolutely obsessed with it. The design is actually much more than cosmetic however, as the various curves and angles allow for tons of different ways for him to interact with it. 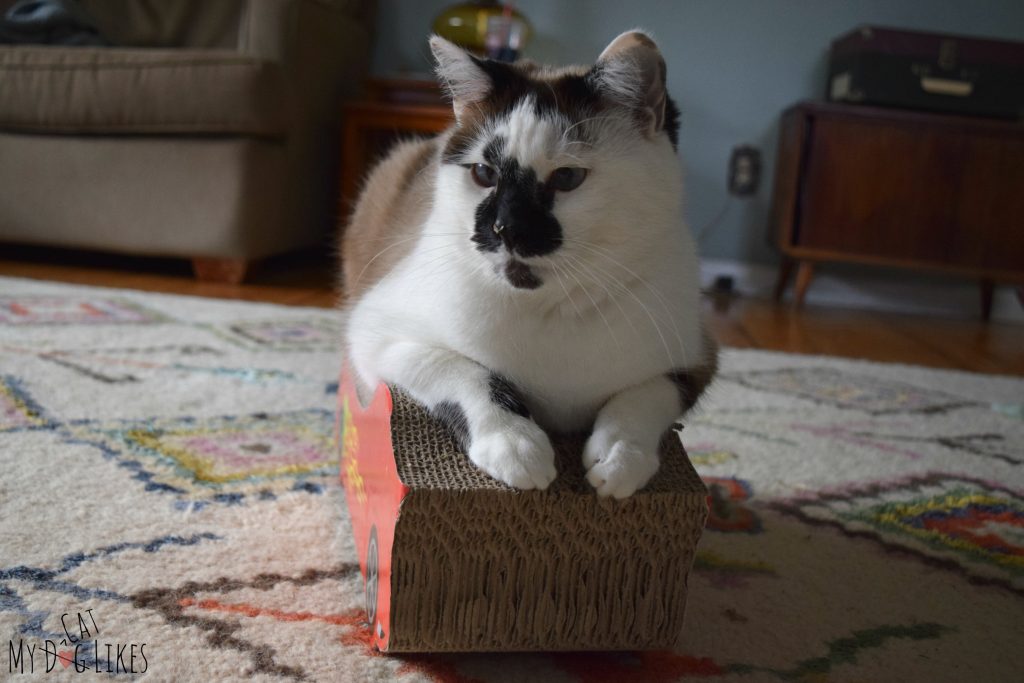 Aside from active playing and scratching, Lucas actually enjoys laying his head (or entire body) on his Race Car nearly just as much. We are now a few weeks out from Christmas and the Cat Love scratcher has not lost its intrigue for him – something uncommon with so many cat toys. 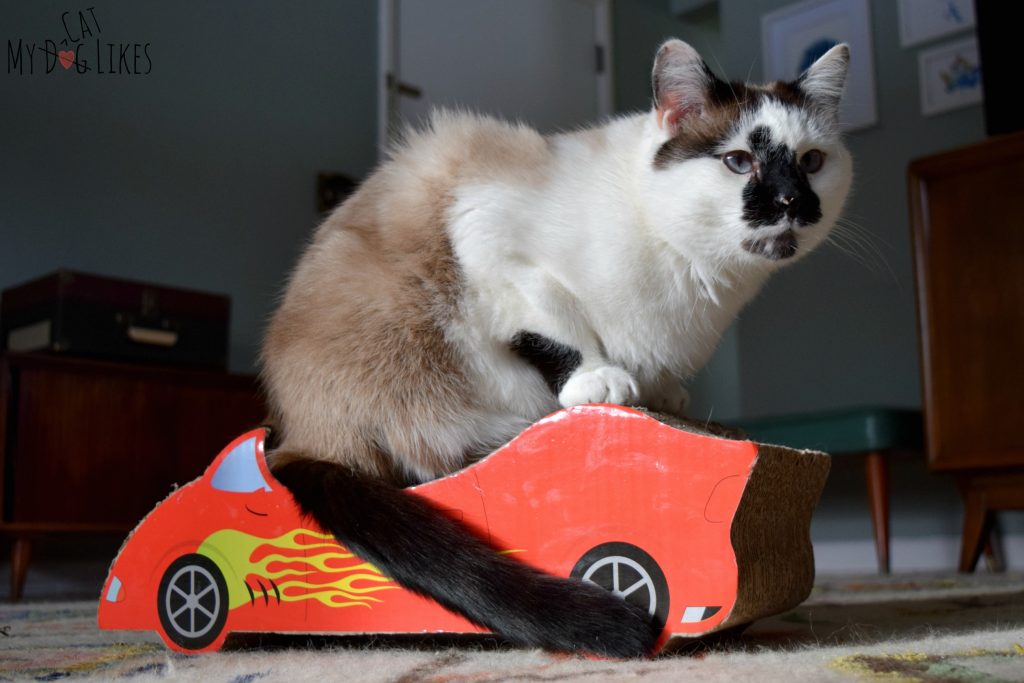 We would highly recommend this Scratcher (or any of the other fun Cat Love models) for any scratch pad enthusiast!

Click Here to Pick up a Cat Love Scratcher on Amazon!