Lucas is a big fan of scratch pads – more so than any cat I have ever known.

Because of this, we have always given him plenty to choose from. By directing him toward appropriate objects like cardboard scratchers, we can not only fulfill his innate scratching desires, but also save our furniture and carpets as well!

Today we are going to be taking a look at Lucas’ latest obsession – The Cat Claws Convertible Scratch Pad! 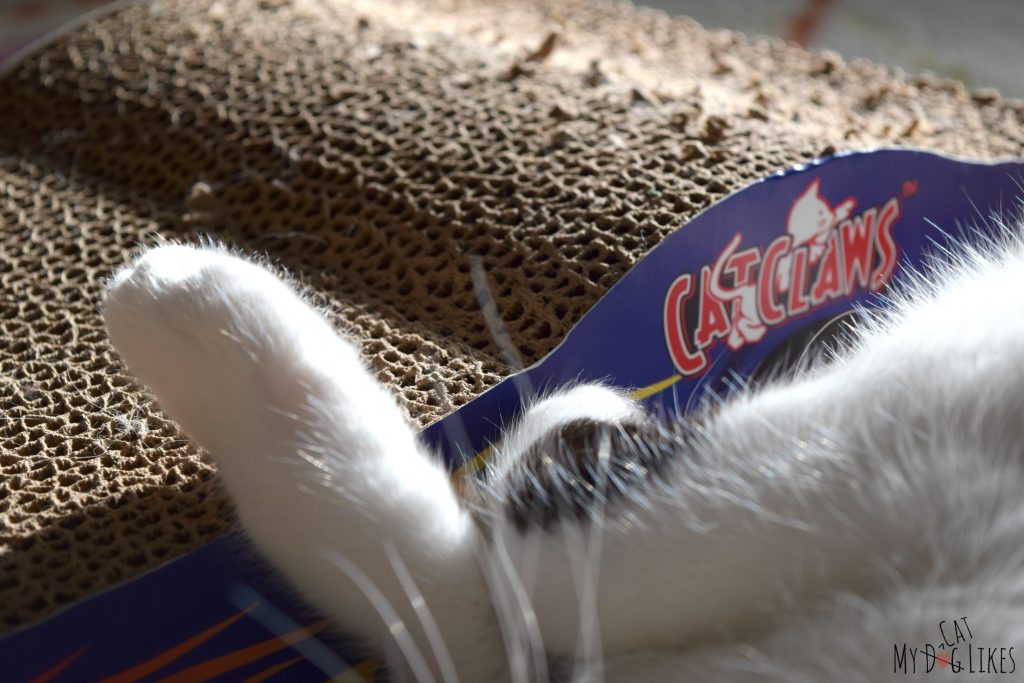 Why Do Cats Scratch in the First Place?

Scratching is not merely a claw sharpening exercise as commonly thought. This behavior actually accomplishes a wide variety of things for our feline friends: 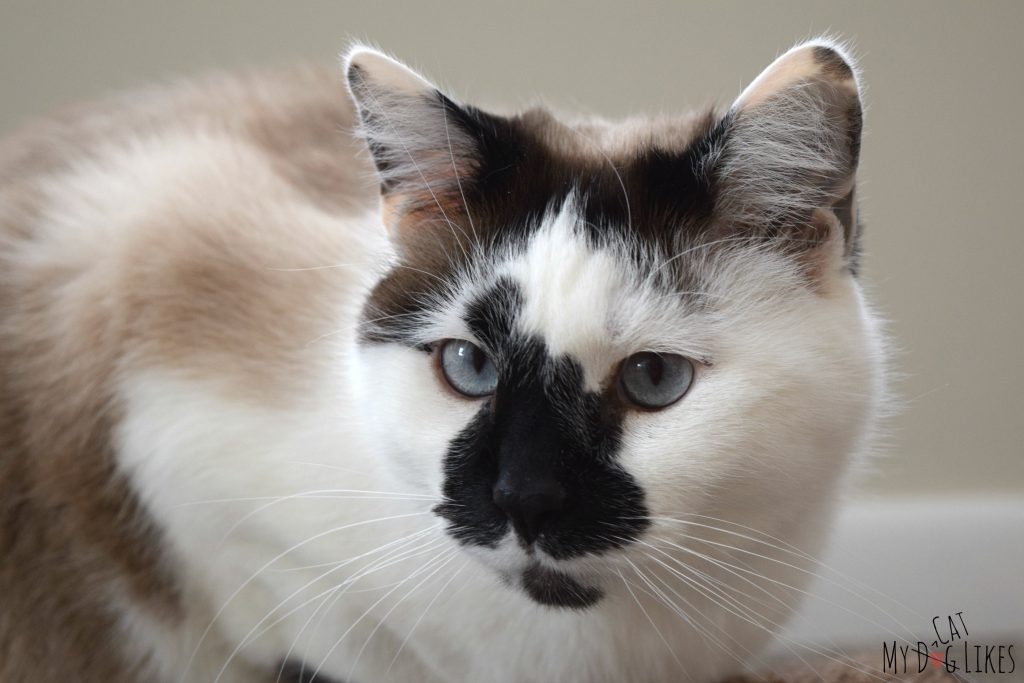 Cat Claws is a family owned company, that has been making all natural cat products for over 30 years. They got their start after the founder (who owned a corrugated box company) realized how much his cats enjoyed scratching on his sample materials. Since then, they have become well know for their huge variety of innovative (and often hilarious) cat scratchers, cat toys and even treats. 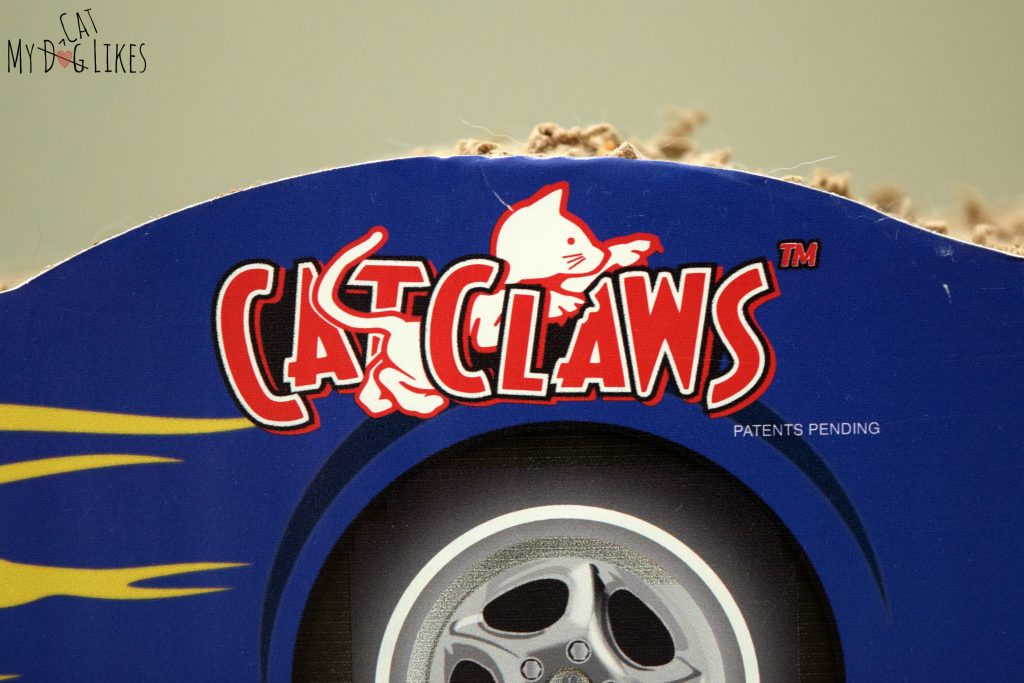 As a company, Cat Claws is strongly committed to the environment, using recycled paper for their scratch pads and soy based ink on their labeling. All of their scratchers are also made in America and 100% recyclable after use!

Cat Claws was kind enough to send over a shiny new scratcher for our resident expert to test out. They are also sponsoring a giveaway so make sure to read through until the end!

The Convertible Scratch Pad is a part of their M.A.X series which includes other fun models such as the Cat Sofa, Cat Triangle, and Cat Turtle.

You seriously NEED to check out their collection!

This is our first Cat Claws Scratcher, but definitely not our last! 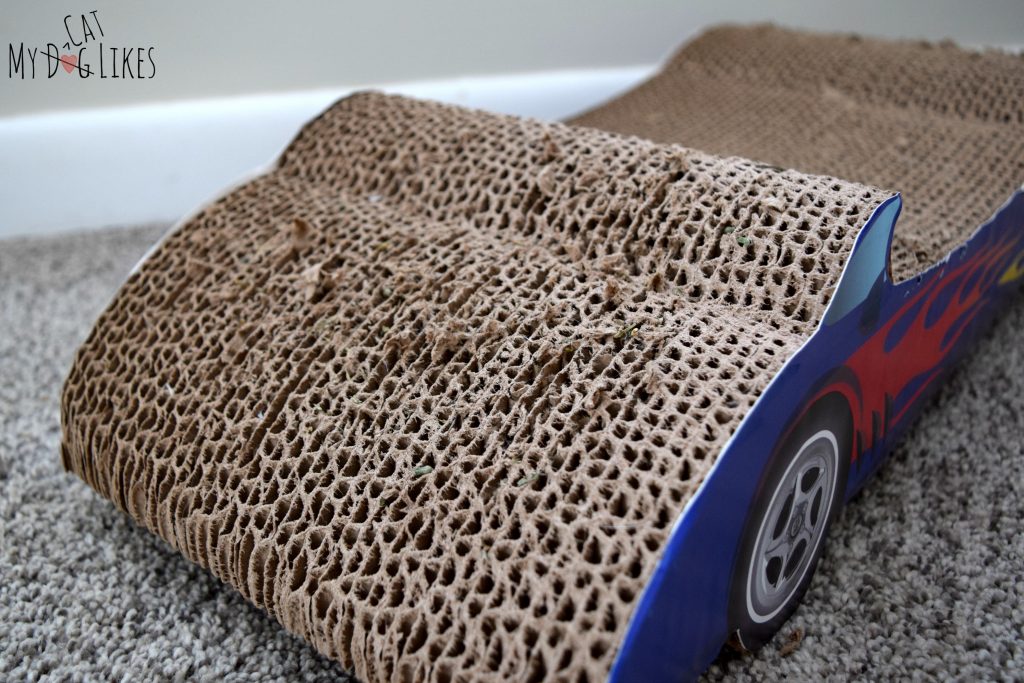 The car itself measures 21″ X 9″ X 4″ and weighs about 1.5 lbs. What is really cool is that they include a small bag of certified organic catnip along with every scratch pad!

Typically we have to add a bit of catnip onto a new toy or scratcher to get Lucas interested – but in this case we didn’t even have time! And forget about capturing photos while it was still in pristine condition! 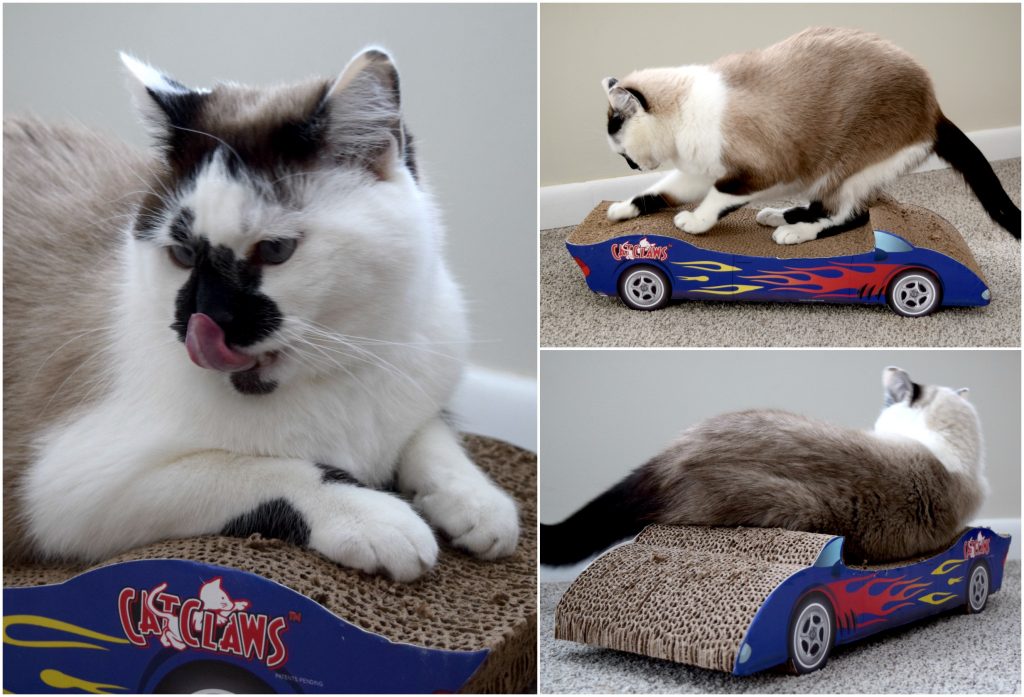 As soon as we opened the box, Lucas was all over this thing – scratching, rolling, and claiming it as his own. But what can you do? This is his blog after all!

We let him have his fun and postponed our plans! 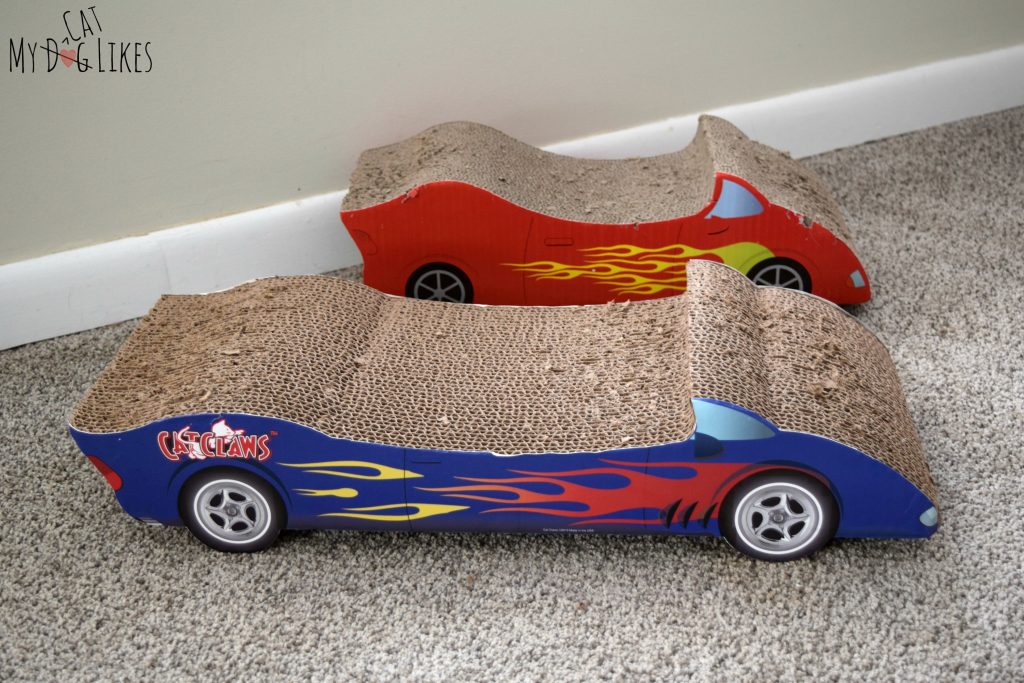 Believe it or not, this isn’t the only car in Lucas’ garage!

The Cat Claws scratcher is much wider than the Cat Love model that we have tried on the past – making it more stable, and less likely to tip over. This also gives Lucas more room to hang out and “meatloaf” on the top (which is a another hobby of his). 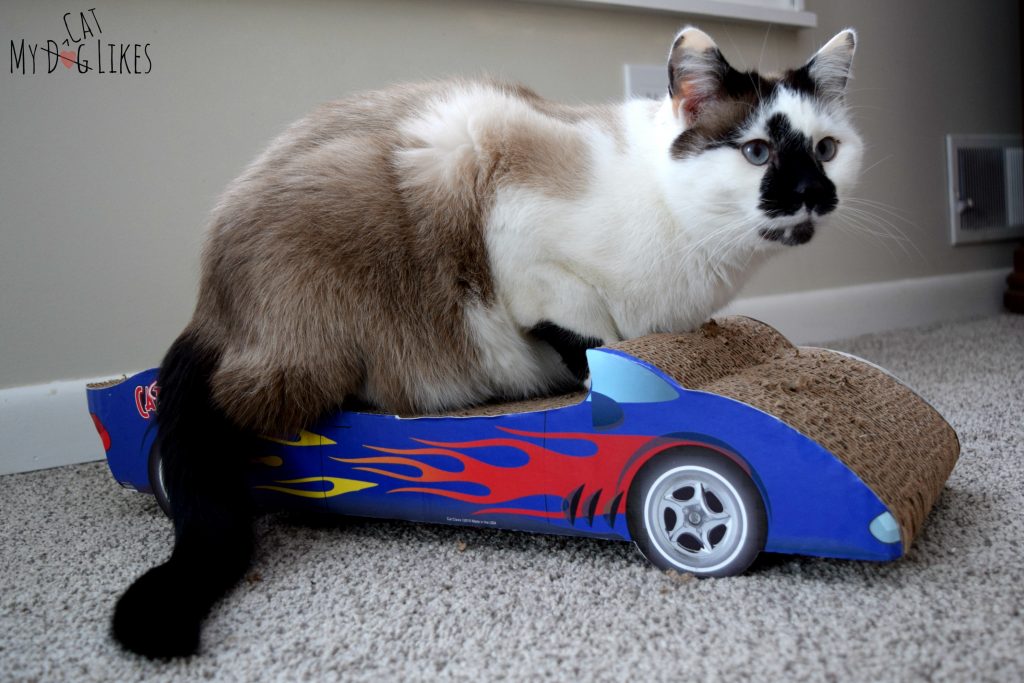 The corrugated cardboard used is of a really great consistency as well. It has a good amount of give – allowing Lucas to sink his claws right in and pull, while still maintaining its shape and not wearing too quickly. This is NOT the paper thin variety that is often found in cheaper scratchers.

We have had this scratchpad for nearly 2 weeks now and it has not lost it’s novelty at all. Lucas still visits it multiple times per day to get a good scratch in and is commonly found napping on or near it.

While you may think that these funny shapes are more for humans than cats, there is more to the design than meets the eye! The curves and angles provide your cat with a wide variety of ways to interact with the scratcher – making it extremely versatile and your cat less likely to tire of it. 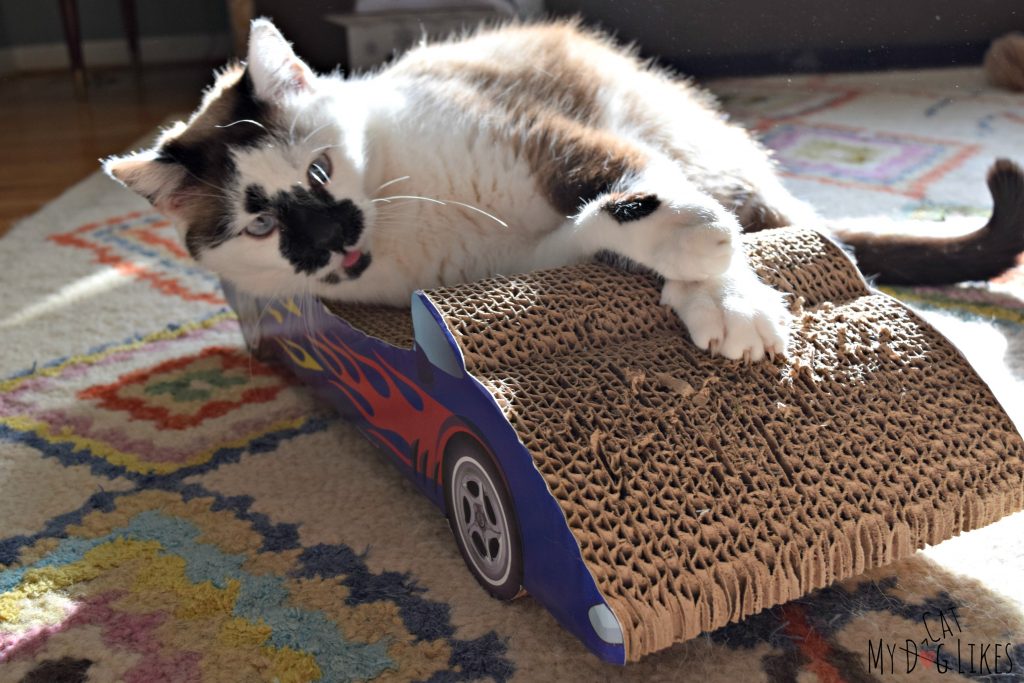 We would highly recommend the Cat Convertible (or any of the other fun Cat Claws models) for any scratch pad enthusiast!

Want to pick up your own Cat Claws Cat Scratch Pad?

Click Here to Pick up this Car on Amazon!

Or – enter the giveaway below!